(research.)  Since the Midtown Greenway is an early conversion of a railroad corridor that has reserved space for a future transit line, we used it a lot in the early days of the Atlanta Beltline’s grassroots effort as our most relevant case study. Crossing below nearly 40 streets as it cuts east-west across the city just south of downtown, the corridor connects the Lake of the Isles and Lake Calhoun to several bus routes and the Hiawatha light rail line. I rode it for the first time at a Rails-to-Trails conference in 2005, and again in 2009. It’s an amazing 3-mile segment of Minneapolis/St. Paul’s extraordinary regional trail network. >> Ryan Gravel 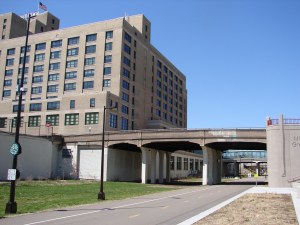 Check out the Midtown Greenway.

Map it: at Lake of the Isles/Lake Calhoun, at Chicago Avenue, at the Hiawatha line.