Sixpitch > Atlanta’s Honor Farm is the keystone for greenspace expansion

(work.) A version of this post first ran in the Saporta Report’s leadership blog: “Atlanta Holds the Key to Dramatically Increase Needed Greenspace.” It describes how the City of Atlanta’s reforested Honor Farm could jumpstart a much larger park proposal called the South River Forest. First proposed in the Atlanta City Design, this expansive idea is now the focus of Sixpitch’s work with The Nature Conservancy.

We slipped through the fence at the street’s edge and within seconds, a shroud of oaks absorbed the city sounds and cast a cool shade on our adventure. I was working on the Atlanta City Design and got to tour the near-mythical Honor Farm. It’s a 300-acre reforested tract of land that is owned by Atlanta but sits outside the city limits. Also called the Old Prison Farm, this is where low-risk convicts from the nearby Federal Penitentiary lived and worked in the early to mid-1900s.

A few remnants of the farm remain. Our journey took us down a terraced landscape that feels like an overgrown orchard. Two old farm ponds reflected the sky through their protected openings in the now-dense forest canopy. Nearby stood crumbling ruins of old barracks and other buildings.

Some histories describe the Honor Farm as a land of forced labor camps and lynchings, making it truly hallowed ground. You can feel the weight of those stories as you walk through the forest, and if an occasional thunder of gunshot splits the air, it’s a creepy reminder that the farm’s only legal use today is a shooting range and training ground for Atlanta police. In more secluded corners, of course, it is also an illegal dumping ground, compounding the challenges for nearby residents who have little say in such matters since they can’t vote in the city that controls the property. 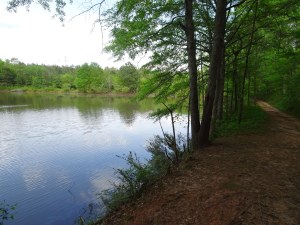 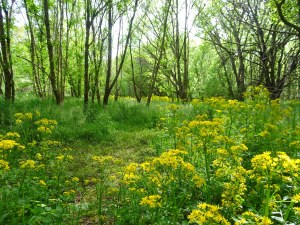 On that bright Spring day, however, we put the site’s dark history behind us – consoled by the restorative power of nature and buoyed by the sheer beauty of the forest. Down the rolling hills and hollows and into the floodplain we went, discovering dancing sunlight illuminating a wooded field of yellow wildflowers and luminous green forest grass. In a few more steps we reached the sandy banks of Intrenchment Creek – the main reason I had made this trip in the first place.

We were standing at one branch of the South River headwaters, which flow into the Ocmulgee River and later, the Altamaha. Together, they carry the storm drainage of our polluted cityscape over 400 miles to the Atlantic Ocean at Sea Island and Little Saint Simons. Standing there in a radiant forest, you might think you were anywhere else in Georgia – yet you are only five miles from Five Points, the center of downtown Atlanta. 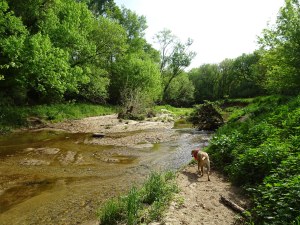 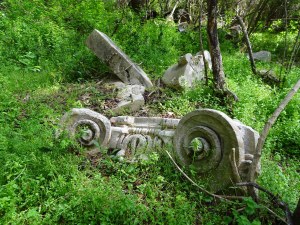 For twenty years there have been plans to turn this old farm into a park. After my hike that day, through the Atlanta City Design and subsequent work at The Nature Conservancy, we expanded that vision to propose a truly massive regional greenspace – over 3,000 acres crafted from existing parks, swaths of remaining forest, truck yards, and several closed landfills. Now called the South River Forest, this adventurous landscape includes famous destinations like the old Carnegie Library stones on the Honor Farm and the Doll’s Head Trail at Constitution Lakes, as well as a lesser known elephant cemetery and the ghost of Lake Charlotte’s missing lake.

Importantly, the South River Forest’s vision also includes the people in surrounding communities. We are working to embed tools and networks for revitalization without displacement into the plan, meaning that even in the face of Atlanta’s rapid transformation, it’s still possible to be smitten with the potential for nature at this scale. The South River Forest is metro Atlanta’s last chance for a park of this size inside our perimeter highway. At its center is this old farm – the keystone that connects everything together. And because it is already owned by the city, the Honor Farm may be the lowest hanging fruit ever known for dramatically increasing greenspace in Atlanta.  >> Ryan Gravel