[press.] People talk about the Atlanta Beltline like it’s a single project impacting a single community – but it’s a much larger project than that. The Atlanta Beltline’s northside stands out for its regional benefits. John Ruch covers Buckhead’s Beltline for Reporter Newspapers: “Beltline creator says rail transit would benefit Buckhead amid MARTA cutback concerns.”

Excerpt > “[Gravel] cited Piedmont Hospital as a big Buckhead institution that would benefit from Beltline rail. Piedmont did not have a comment, but another major hospital next door to it on Peachtree Road, the Shepherd Center, is publicly supporting the call for rail-based transit. “The Atlanta Beltline’s Northside [segment] connects growing but traffic-jammed Piedmont Hospital directly into the MARTA rail network to the east and into fast-growing communities for its workforce to the west,” Gravel said in an email. “For Buckhead, this makes a car-free way of life possible for employees at Piedmont and others along this booming stretch of Peachtree.”

Another reason Buckhead Beltline rail matters, says Gravel: regional connections to Cobb County via the Tilford rail yard in northwest Atlanta and to Emory University via the planned “Clifton Corridor” light rail. “For the region, the Atlanta Beltline’s Northside makes a strategic connection between the future Clifton/Emory line and the Tilford Yard route up to Cumberland/Galleria,” he said, offering a map he made of the potential transit links.”  > More. 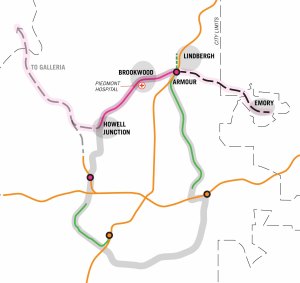 Related > Piedmont Hospital, the Shepherd Center, and the rest of the traffic-choked Peachtree corridor through Brookwood are not included in Beltline transit funding from the 2016 sales tax. They are part of the #TwoThirdsNotServed in the More MARTA plan.